Section 122 of the CGST Act has been amended to comprise that the person involved/benefited out of fake ITC (Input Tax Credit) shall also be liable for a penalty of 100% of the tax involved. The penalty will be levied on that person who retains the benefit of a fraudulent supply of goods and/or services and on a person at whose instance such fraudulent transactions are executed.

However, it would be expedient for the enforcement authorities to ensure that bonafide person or recipients do not have to pass through the harshness of such severe provisions.

Section 132 of the CGST Act has been amended to make the offence of a fraudster availing ITC (Input Tax Credit) without any invoice or bill as cognizable and non-bailable. The law is amended to extend the imprisonment to those ‘who causes to commit’ and ‘person retaining the benefit’. Before introducing the amendment, the punishment was restricted only to the person who committed the fraud.

Date for ITC on Debit Note:The date of the debit note will be considered for availing ITC (Input Tax Credit).  This will benefit a lot, now, ITC in respect of a debit note issued in, for example, Financial year 2020-21 for an invoice of Financial year 2019-20 can now be claimed by the recipient on or before the due date of September 2021 return or the annual return of Financial Year 2020-21, whichever is earlier.

Composition scheme to service providers:
Composition scheme cannot be availed by taxpayers supplying services outside the state, making exempt supplies, or making supplies through e-commerce operators who are liable for Tax Collected at Source (TCS).

A new provision has been included to provide for the cancellation of voluntary GST registration of distinct people.

The power to condone the delay in applying for revocation of cancellation has been given to Additional Commissioners and Commissioners for 30 days.

The supply of fishmeal provided a retrospective GST exemption from 1 July 2017 to 30 September 2019.

It further seeks to retrospectively levy central tax at the reduced rate of six per cent. on supply of pulley, wheels and other parts (falling under heading 8483) and used as parts of agricultural machinery of headings 8432, 8433 and 8436, during the period from the 1st day of July, 2017 up to 31st day of December, 2018 (both days inclusive).  It also seeks to provide that no refund shall be made of the tax which has already been collected.

CBIC extended the time limit to issue the removal of difficulty order from earlier three-year limit to now five years w.e.f 1 July 2017. Also, the board’s approval is not required for the order to determine the expense in special audit and extension of the time limit to return the inputs and capital goods from job worker.

Disclaimer: ‐
This article is intended for private circulation & knowledge sharing purpose only. We have made best of our efforts to ensure the accuracy of information in this article, however we will not be responsible for any errors that may have sneaked in unconsciously and do not accept any liability whatsoever, for any direct or consequential loss arising to any one from any kind of use of this article.
Posted by Vinay Kaushik & Co. at 03:21 No comments:

Dear GST-registered dealer - DON’T DO ANY OF THESE

All these email and messages are going to be generated automatically by the system. So now onwards, if you need to avoid strict action by the department be firm in timely filing of GST return.

The CBIC released an important NOTIFICATION NO. 49/2019 - CENTRAL TAX, dated 9-10-2019, inserting a new sub-rule (4) under rule 36 of the CGST Rules, 2017, stating that provisional credit can be hereafter claimed in the GSTR-3B only to the extent of 20% of eligible ITC reflected in the GSTR-2A.
Read more: Provisional ITC in Form FSTR-3B as per the New CGST Rules

1. Interest to be computed on net tax liability

Earlier there was a confusion among taxpayers on the issue of delayed payment of tax, whether interest would be charged on gross tax liability or only on net tax liability.
A Proviso has been inserted in Section 50 of the CGST Act, 2017 (‘Interest on Delayed Payment of Tax’) to clarify that interest for late payment of tax shall be levied only on that portion of tax which has been paid by debiting the electronic cash ledger.
The exception to this rule is, where returns are filed subsequent to initiation of any proceedings under GST Act, in that case the interest shall be levied on the gross tax liability.

4. Composition Scheme will apply to service providers also
Section 10 of CGST Act, as is presently, makes provisions only in respect of suppliers of goods. This section is proposed to be amended by inserting section 10(2A) of CGST Act to provide for composition scheme for suppliers of service and goods with aggregate turnover upto Rs 50 lakhs. The tax rate will be upto 3% CGST plus 3% SGST/UTGST.

Following are other changes in section 10 of CGST Act –
(a) 'Exempt supply' will not include interest or discount on deposits, loans or advances. Thus, this interest will not be considered for calculating 'aggregate turnover' for eligibility of composition scheme.
(b) Interest will also not be considered for calculating exemption limit of first 10/20/40 lakhs in the first year of operation of business.
(c) Casual taxable person or non-resident taxable person will not be eligible for composition scheme. Earlier, conditions (a) and (c) were already provided. Only condition (b) is a fresh relaxation.

7. Penalty for profiteering
Penalty upto 10% of amount profiteered can be imposed by Authority for Anti-Profiteering. The penalty will not be payable if amount ordered is deposited within 30 days – section 171(3A) of CGST Act proposed to be inserted.

Between July to September, 2019 (for three months), the new return system (ANX-1 & ANX-2 only) would be available for trial for taxpayers to make themselves familiar.  In this period, taxpayers shall continue to fulfill their compliances by filing FORM GSTR-1 and FORM GSTR-3B.

For October and November, 2019, large taxpayers would continue to file FORM GSTR-3B on monthly basis. They would file their first FORM GST RET-01 for the month of December, 2019 by 20th January, 2020.

To reducing the compliance burden of small taxpayers and to bring certainty in various ambiguous matters, GST Council in the 32nd meeting, held on 10th January, 2019, had taken various key decisions.

There are 7 important changes effective from April 1, 2019. This article gives insight of notifications and circulars issued on March 7, 2019 by the CBIC. 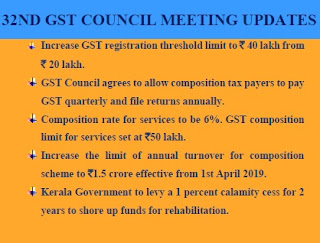